100 KG OF SEPARATION-the fish, Kiri Te Kanawa and me 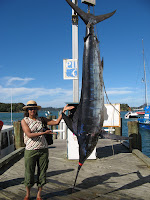 I was indirectly involved with a Kiwi celebrity. Within days of each other, a couple of marlin were caught in Northland New Zealand. Opera singer Dame Kiri Te Kanawa caught one and some no name guys caught two. These were separate incidents but they happened in the same part of the country around the same time.
An announcement was made and people made their way down to pier  C. They were anxiously awaiting the arrival of a dead fish. A marlin had been caught earlier that day and it was being brought in for public weighing. As the time neared for this spectacle, the crowd grew bigger. Similar to public beheadings in the day of the guillotine, the crowd was abuzz with excitement-all jostling for the best viewing position, cameras at the ready.
The marlin arrived hog-tied on the back of the boat Blackhawk admist the sounds of oohs and aahs from the crowd. It weighed in at just over 112 kg. Dame Kiri Te Kanawa had caught one herself the day before and it was over twice that weight! The fish was cleaned and primped, ready for its photo shoot. The proud fishermen who caught it signed the appropriate papers and then they posed with the fish-blood still dripping down its nose. It had been caught 11:30 a.m. that morning and the time was now 5 p.m. 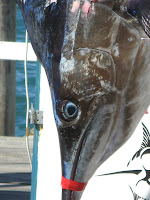 Onlookers snapped away oohing and aahing at the spectacle of the striped blue marlin hanging upside down with a look of resignation on its face as if to say "Darn! I've been caught."
They actually caught two of them-one was released (as required) and the other one kept. It's illegal to sell marlin in New Zealand so the fish would be chopped up, smoked and packaged for the fishermen to share with family and friends. And to think leftover turkey at Christmas or Thanksgiving time seems to go on forever! Wonder if Kiri has finished her marlin feast?
So now I can say that I have walked on the same soil and cruised the same bay as Dame Kiri Te Kanawa. And I have shared a similar experience with her vicariously through a fish.
Posted by Wanderlust at 1:51 a.m.