CAN I GET A SHERPA PLEASE? 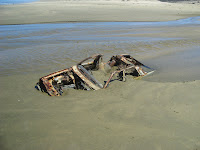 Known for carting heavy packs up the Himalayas for mountain climbers, would Sherpas carry a boogie board up the sand dunes near 90- mile beach in Northland New Zealand? I wonder. If so I could have used one the day I went on an all-day tour to Cape Reinga.
I thought the hardest part would be going down the hill but it turned out that coming up the hill had proved to be the most arduous challenge. Like walking in snow during a blizzard but much warmer and with fewer clothes, we trekked up the path single file. The wind taunted our efforts to walk while carrying our boogie boards. It was hard going-calves ached, thighs burned and lungs heaved under the pressure of walking up the sandy incline. Heavy breathing befell some and others stopped to catch their breath. I continued to trudge up and when I arrived at the top saw a great view of the ocean and sand. It was spectacular but not spectacular enough to make a trip down the hill to get my camera and then back up the hill again to take a picture.
And now the hill...tobogganing down a sand dune.
Fear like crisis is something that in the moment you just manage your way through. You don't think about it or fret over it you just do it. To think and do are mutually exclusive. If you think, you can't do and if you do, you don't have time to think. Before you know it, its over. One minute you're at the top of the hill glad that you bought travel insurance and the next minute you're at the bottom thinking 'that wasn't so bad-let's do it again'. But don't get carried away with this thought. I did.
I braved the walk up the hill again and went down for a second time. Not only did my successful first run go to my head, so did the sand. As I neared the bottom of the hill I fell off the board. With the momentum I had gained I tumbled down the remainder of the hill like a human tumbleweed in a tornado. I had seen skiers on t.v. wipe out like this and never thought I would unintentionally mimic their actions. Luckily all I had to show for it was sand everywhere and slight embarrassment.
The grains of sand are so small that many of them can make their way into your nether regions without you knowing it for days afterwards. Good thing I wore a tan-coloured ensemble that day.
I named our driver Fred after the dearly departed character on Coronation Street. The reason being, I said the reason being, is that he tended to repeat himself. Thinking of the people learning English (of which there are always a few on these tours) this was helpful and for important information ( e.g. how long the toilet stop was) this was also good. But at times the repetition was just annoying. Worse than an echo, I could only imagine how I would dread having to interpret for him. But he was a funny and fabulous host who missed his calling in the entertainment field. The most endearing thing about him was that he called everyone 'Bub'. This is a term I have often heard used amongst the Maori population. From what I can gather it is a term of endearment-the way English people call everyone dear-or at least they do on British t.v. dramas. Come to think of it, my grandmother Bea called everyone dearie. I digress.

In addition to the sand dunes, this tour took us to see Kauri trees, hug them and be tempted to part with our money to purchase expensive souvenirs made from them. I admit it. I gave into temptation. But I bet I'll make the best tasting pastry with my kauri rolling pin.
Kauri trees are very large trees that served to build Maori wakas or canoes due to their strength. The resin from these trees is called Kauri gum and it's definitely not for chewing. It was used in varnish amongst other things and proved a profitable business for some time. You can still buy kauri gum that dangles from your ears and/or neck on hooks and chains. It's appearance could be mistaken for amber.
However, the highlight of this tour for which it was named was the trip to Cape Reinga and 90-mile beach.
Cape Reinga is considered the northernmost point in New Zealand where the Tasman Sea and the Pacific Ocean meet in never ending clashes. There is a lighthouse here with sign posts letting you know just how far from the rest of the civilized world you are. The distance to Vancouver is 11,222 km-approximately.
In Maori mythology Cape Reinga is considered the "leaping off place" where the spirits of the dead journey en route to the afterlife. After making their way down the pohutukawa tree at the bottom, the spirits return to the original homeland (Hawaiki) of the Polynesian explorers who arrived in this land about 1000 years ago. Post cards sent from the post box here receive a special stamp.
90-mile beach is a misnomer-it is not actually 90 miles long. It is, however, a long stretch of beach that has been named an official highway with a 100 km/hour speed limit. Beware though of high tide as it can be treacherous to your vehicle (as the attached photo can testify).
To cap off our tour we made a stop at the Manganui fish and chip shop-the best fish n' chips in the galaxy, I said the best fish and chips in the galaxy according to Fred. Of course, if you travel around New Zealand long enough you'll find anyone who runs or owns a fish n' chip shop claims the same. It was interesting too how some of the stragglers at some of our stops were the first to leave the bus here. They were already seated and chowing down while I was still waiting in line to get my food. Usually we were the ones waiting for them.
The meal was too rushed to be enjoyed properly. We had half an hour to wait for our food, pay for it and eat it. And we were already running behind our tour schedule. But the meal was good. The french fries were nice but there were too many of them for me. The fish actually tasted like fish with a little batter on it rather than the other way around. Bring your appetite.
All in all it was a great tour. The group was good, the driver even better and the sights we covered lived up to their billing. The tour did suit its company name. It was awesome!
Awesome NZ
www.awesomenz.com
Posted by Wanderlust at 1:49 a.m.