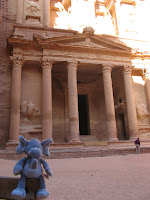 I didn't turn to stone nor was I afraid but I have officially done Petra, all of Petra, every last step of it (of which there were approximately 1600).

Petra is probably Jordan's most well known site. It is a city amongst the mountains that no one would expect to be there. Built by the Nabateans, no pardon me, carved by the Nabateans (their religion forbid them to 'build' things), the Treasury (pictured behind me) in this amazing place was in the film Indiana Jones and the Last Crusade. I will have to watch this movie again as I don't recall this part.
The day began at 7 a.m. when our private tour bus drove us to the entrance of the Petra site.

There was a chance to ride horseback until the opening of the canyon but I chose to forgo this option. I didn't have the small change to tip the horse guide and felt I would be betraying the camels by riding a different animal. So I walked.

We then made our way through the canyon. It was created by the force of nature and various cultures left their mark here as is evidenced in the Roman and Greek carvings. We were told the walk to the Treasury was short but it seemed to be taking forever. Every bend, every turn, we wondered are we there yet? And then peeking from behind the narrow canyon, there it was! 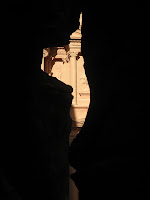 The purpose of this structure is not known for sure. Some sources suggest it is a library while others believe it to be a tomb. Upon closer inspection one can see carvings of the Gods of various civilizations (i.e. Babylon, Assyrian, Egyptian, Roman, Greek, Nabateean) making it a sort of non-denominational site.

The Treasury, however is only just the beginning of the Petra adventure. Just beyond is a pathway leading to other carved buildings at the site. Along the way are some toilets, a number of tourist shops and a few cafes. This walking freeway looked like a scene from a movie set with all the extras wandering about i.e. daredevil donkeys, cantankerous camels and khaki clad tourists. You may be wondering what was for sale in the shops? Jewelry, teapots, trinkets, carvings and an accordion file of postcards for only "1 dinar". Most cafes sold water at a decent price while other more 'entrepreneurial' shops sold their drinks at a premium.

The next spectacular stop was the monastery. It was here that the great walk of dehydration began.

In the searing heat of the scorching midday sun we walked up approximately 800 uneven stone steps. The daredevil donkeys carrying rich tourists (or smart tourists for that matter) raced past us as we huffed and puffed and sweated our way up the stairs. I felt like Frosty the Snowman left out on a hot day in the desert. Had the melting continued all that would have been left of me would be my sunhat, sunglasses and clothes in a heap on the ground in a puddle of my own hard earned sweat.

The body is composed of approximately 60% water or so I'm told and I felt like I was down to almost 0%. It seemed the only thing left of me was my skin, bones and muscles. I felt like a walking dried prune slathered in sunscreen with a sunhat on. And it wasn't over yet.

Halfway to the monastery one of the many 'jewelry shops' i.e. tables with necklaces for sale was playing a Bob Marley tune. As we passed by the chorus went,"don't worry about a thing, 'cause every little thing's gonna be alright.." How appropriate. I was counting on it.

Finally! We made it to the top, saw the monastery which was just as spectacular as the Treasury and then climbed to the "view at the end of the world." 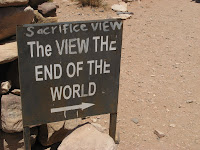 At that point it certainly felt like it. We had only been at Petra for a few hours and already I had drunk most of my water supply for the day. Buying more drinks was a challenge as I only had big bills and no one wanted to part with their small change. Luckily I encountered a shopkeeper who was more interested in making a sale than his small change so I drank on.

On the way down the slippery slope of steps those donkeys passed by again. Every now and then they would lose their footing and nearly come crashing down into the crevice at the side of the steps with terrified tourists in tow. They kept going as though nothing had happened. Note: Donkey poo is very slippery on stone steps. Beware and tread carefully.

At the bottom and then it was onto round 2. Three of the tour members opted out at this point. The rest of us soldiered on. Armed with litres of water we tackled the other 800 steps. One girl became nauseous from heat exhaustion or dehydration. Who knows. Another of the group had a thermometer which read 39 degrees. I believe this was on the conservative side. Any chance to find cover we took. Shade was also at a premium in this desert canyon. Fortunately there was enough of a breeze every so often to encourage us to finish the walk on our own 2 feet rather than on a stretcher. At the bottom we walked out of the canyon and into the waiting air conditioned tour bus.

So 1600 steps, about 15 km, several pictures, gazillion beads of sweat and at least 4 Litres of liquids later I collapsed in my room at the Petra Diamond Hotel utterly exhausted. I had been officially Petra-fied.
This experience will be forever etched in my memory as the sands of Petra are forever enshrined on my walking shoes. 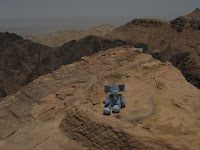 Me and the view at the "end of the world" and the end of this blog post.

Want to learn more about Petra? Start by clicking here.

Email ThisBlogThis!Share to TwitterShare to FacebookShare to Pinterest
Labels: Jordan